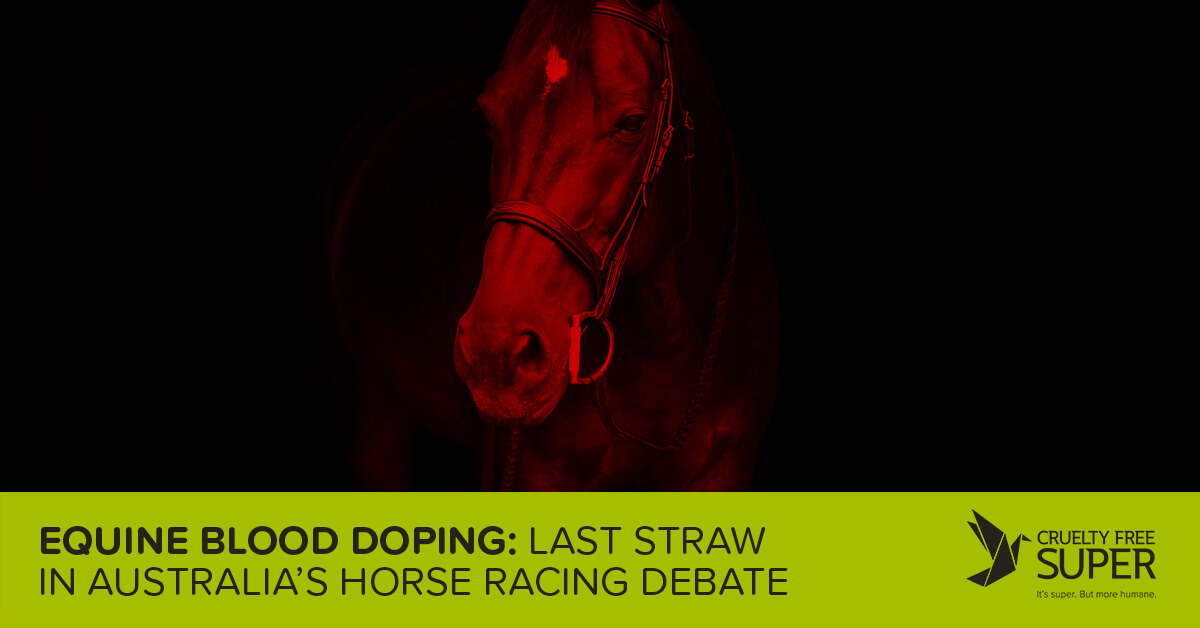 Picture this: It’s the Spring Carnival at Flemington, one of the biggest meets on the Australian racing calendar.

The racing prize pool in Australia has grown to over 600 million dollars, and everyone (both trainers and punters) is chasing the jackpot.

Punters are eagerly awaiting the arrival of legendary horse Wynx. She’s lining up to win her 21st race, and with the crowd diverted and transfixed on her arrival, a stablehand takes a mare trained by Robert Smerdon named Lovani into a swab box. The stablehand in question, Greg Nelligan, removes a syringe filled with pink paste from a yellow bag and attempts to plunge the contents into Lovani’s mouth. ‍
Unfortunately for Greg Nelligan, a racing steward has been watching him. The syringe contained sodium bicarbonate, known to boost stamina by smothering the lactic acid in a horse’s body. It’s most effective when a dose is given to a horse within three hours of a race, and then ‘topped up’ again as close to the race as possible. Administering sodium bicarbonate on race day is completely illegal.
When questioned, Nelligan tries to make out as if the doping was all his idea and that Smerdon was unaware that he had been feeding performance enhancing drugs to his horses. However, his phone shows otherwise.
It records 70,000 texts sent over seven years between Nelligan and Smerdon, revealing a systematic plan to dope horses just before races. One sent in 2014 states, “Top up for Brentwood and Celeritas?” Nelligan simply replies “Yes.”
This blunder sent shockwaves through the entire racing industry, opening up a massive public conversation about the systemic animal cruelty and performance-enhancing drug abuse that is as much a part of racing culture as champagne and fascinators. ‍
The audacity of the doping occurring on the race course itself changed the way the public viewed horse racing in Australia.
‍Some could say it was the straw that broke the horse’s back.

“Racing is built on gaming, and central to that is what the industry calls integrity. If you can’t trust the system, then the bet is that punters will take their dollars elsewhere” — Michael Brissenden, Four Corners Reporter
The form of gambling used at racetracks is called ‘parimutuel betting’. It involves the entire amount of money bet on an event going into a large pool. The holders of the winning tickets divide the total amount of money that’s been bet, with one winner often receiving 15 to 25 per cent of the total prize pool. Money is also taken from this pool for racetrack expenses. ‍
With thousands of horses being killed every year because they don’t make enough money for their owners, it really is hard to see how we can justify attending and placing bets on these poor animals’ lives.‍
Reports state that the ‘wastage’ rates for horses in training or racing currently sit at about 40 per cent. The vast majority of horse owners are unwilling to bear the costs incurred by horses who aren’t making them enough money, so they’re often sent to abattoirs to be slaughtered and turned into pet food...
A recent study concluded that many pet food brands contain unspecified animal parts (such as horse offal) that aren’t listed on the labels.
With such abhorrent practices flowing through the veins of the horse racing industry, taking a stand and being a voice for the voiceless with our wallets is vital. Apart from obviously never attending or betting on a horse race, you have further power to put your money where your mouth is and let your superannuation do the talking with the concept of ‘divestment’.

Divestment is refusing to invest (in the form of stocks, bonds or investment funds) in practices that harm the environment, people or animals.

‍Cruelty Free Super’s ethical screening process means we don’t invest in animal cruelty, live animal exports, intensive agriculture, fossil fuels, militarism, tobacco, gambling or slave labour.
We definitely don’t invest in animals in sport, meaning we never put our member’s money into horse or greyhound racing facilities or breeders. So, if you care about horses and don’t want to give a single dollar to the Australian racing industry, then making the switch to Cruelty Free Super is definitely the right move for you.

“In racing, image is everything. Doping scandals are bad enough, but the industry knows it also has a continuing problem with the public’s perception of animal treatment” — Michael Brissenden, Four Corners Reporter
The fate of horses that don’t perform well is becoming increasingly transparent, as retired trainers, retired breeders and people who have been around horses their whole lives come clean and discuss the guilt they feel surrounding ‘wastage’.
One such example of this is Peter Sheppard, who originally built his fortune selling womens’ shoes, but spent much of this money on horse breeding. On 80 hectares of the Mornington Peninsula in Victoria, Peter built a cutting-edge stud farm, breeding and training over 200 horses. But the memory of what happened to many of his horses still haunts him.
“I had some joyous times… and some heartbreaking times. And I wasn’t overly comfortable in the racing environment for a lot of reasons. I believe that money is a curse and it brings out the worst in people on some occasions, and I didn’t particularly like that.”
He says that the truth is that most horses simply won’t make the grade and that there are too many horses being bred for racing. But what happens to these excess non-athletes?
“The fate of horses deemed no longer competitive or those that have run their last race is known as wastage. What happens to them troubled some so much they can no longer stay in the industry” — Michael Brissenden, Four Corners Reporter
Peter’s daughter Melissa tells of ‘knackeries’, where horses are sent to be shot in the head and turned into dog food, meat meal, tallow, and produce hair and hides for both the Australian and overseas markets. ‘Doggers’ scout saleyards for cheap ex-racehorses (or those that never made the cut in the first place), usually purchasing them for $100 to $350 and then transporting them to the knackeries in run-down cattle trucks, where they await for their turn in ‘killing pens’ to be met with a bullet to the brain.
Although the thoroughbred racing industry in New South Wales announced a ban on sending horses to the knackery in 2017, this only applies for horses that are going straight from racing to knackeries. Often, they are first moved into the breeding or sporting sectors (which are unregulated) and will then be sold to knackeries. With over 8,500 horses going into retirement each year, it’s likely that many of them will end up in one of the 30 knackeries around the country that process sheep, donkeys, goats, camels, pigs and horses.
You can read more of Melissa Sheppard’s recount of her visit to the Laverton Knackery here.

No resolution for the horse racing community

“There’s a ground swell of people in this industry who haven’t walked away, by the way. People that are still in it saying, hang on, we got dudded, and we need more answers” — Ralph ‘Racetrack Ralphy’ Horowitz, Horse Racing Commentator‍
You may ask, how has this cruelty and deception existed so deeply within the horse racing industry for so long? How was it not exposed before? Why have no processes been put in place to protect these horses, or at least ensure that they can have a decent life after their racing days are over? ‍
The belief by many is that industry bodies simply aren’t doing enough, and that investigative procedures into matters such as the Smerdon and Nelligan case are flawed and feckless.
Even Peter V’landys, Chrief Executive of Racing Australia, knows that something is dreadfully wrong and needs to change. He recently stated, “You will not be relevant unless you address these welfare issues. You can come in and unless you are willing to change with society you will perish.”‍
As attitudes change and eyes open to the systemic cruelty within the industry, people are leaving the sport in droves. And this doesn’t just apply to breeders, trainers and punters. Emirates Airlines withdrew all sponsorship of racing events in Australia in 2018, as well as Longines, who were a worldwide racing sponsor. These companies are all realising that horse racing is a flawed and corrupt industry, and that in order to move with the times, they’re going to have to withdraw their funding of it altogether.

Just like Emirates and Longines, you too can show that you stand with the horses by withdrawing your funding of the Australian horse racing industry.

Standing against animal cruelty starts with ethical investment, and Cruelty Free Super doesn’t invest in any industries that cause harm or suffering to animals.
If you are passionate about the end of the performance animal industry, make the switch to Australia’s first vegan, animal-friendly super fund. It only takes two minutes, and you can rest assured that none of your money will go towards funding the mistreatment of animals.

We love writing about cruelty-free investing and creating a kinder world, but please be aware that the information provided is general in nature, not personal or financial advice. When we discuss companies, it's not a recommendation to buy, hold or sell shares in that company. If we mention returns, please remember that past performance isn't a reliable indicator of future performance. Before acting on any information provided, you should consider if it's appropriate to you.
Prev
Next

8 Vegan Festivals To Book In Your Calendar Each Year
5 min read
13 Vegan Bloggers to Inspire Cruelty-Free Living
8 min read
The Ethical Business Boom: How Your Ideology and Investments Can Mix
4 min read